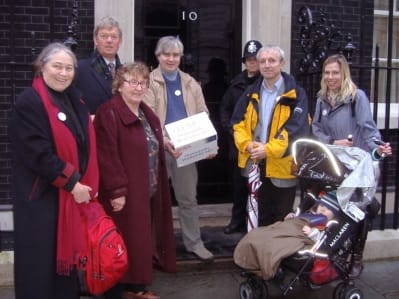 I thought I would give some personal feedback on the H:MC21 Lobby of Parliament. I have done my best to ensure I get all the names and facts right.

On Wednesday 24 February at 2.30pm I joined other homeopaths and patients from across the UK to lobby their MPs in London and submit a declaration, ‘Homeopathy worked for me’, signed by over 28,000+ people. The event was organised by the charity ‘Homeopathy: Medicine from the 21st Century’ (H:MC21).

I awoke at 6.30am that morning feeling rather excited about the day ahead and spontaneously decided it would be good to take some banners. The only problem was I didn’t have any - so I quickly set about designing! A friendly printer very kindly agreed to deliver them to me on Platform One of Stroud train station just as I was boarding my train!

Arriving in London, and with banners in hand, I made my way to the Houses of Parliament. A healthy crowd of homeopaths and patients had gathered outside St. Stephen’s entrance with plenty of banners flying in the air. I handed mine out and they were soon added to the view.

We were quickly given access to Parliament, so we headed through security and into the historic building. There was an air of anticipation as we wandered through the old halls to then gather in the Lobby where ‘visit request forms’ for our MPs were completed. Many of us had meetings with our MPs and for about 2 hours there was a constant flow of discussions about homeopathy. It was quite a sight! I later learned that over 200 homeopaths requested meetings with their MPs. I have no idea about the total number of supporters, but we were definitely making a good impact! David Tredinnick MP, who was also Joint-Chairman of the All-Party Parliamentary Group for Integrated and Complementary Healthcare since 2002, came down to see us all and give his support. He advised that the way to get a really good response would be for all homeopaths to request a face-to-face meeting with their local MPs to discuss homeopathy (I would urge you to do this - they are people just like you and I and very easy to talk to). David also joined the group who handed in the 28,000+ declaration signatures to Number 10. 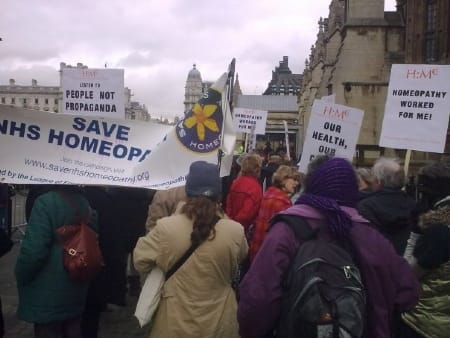 My MP, David Drew from Stroud, withdrew from his meeting to see me twice! On both occasions he was extremely supportive, positive and helpful. He aired his dismay at the terrible way the whole evidence hearing had been handled and he offered to meet me and any other interested homeopaths from Stroud once he returned. On the same morning David Tredinnick MP motioned against the Evidence Check on Homeopathy on the grounds it was biased and many MPs including David Drew had already signed it. Jenny Seagrove, the actress, was amongst the homeopathic group, along with a 1 year old and a 96 year old, both of whom had only ever been treated with homeopathy.

Much of the conversation and anger in the Lobby was about the way the Science and Technology Committee's Report, Evidence Check on Homeopathy had been organised and executed. The Committee gave homeopathic organizations just 10 days to submit evidence for the report, and not all homeopathic organisations were informed about the event. The event was far from impartial. Evan Harris MP is a known outspoken critic of homeopathy and just 12 people were invited to give verbal evidence - 3 of whom are known critics of homeopathy: Professor Edward Ernst at Exeter University, Tracy Brown, the Managing Director of Sense About Science, and journalist Dr Ben Goldacre - none of whom have any expertise in the subject. Verbal evidence was not even heard from the UK largest regulator of homeopaths, the Society of Homeopaths. The Committee did not consider overseas evidence from countries such as France and Germany, where provision of homeopathy is far more widespread than in the UK; or from India, where it is part of the health service. It also ignored the 74 randomised controlled trials comparing homeopathy with placebo, of which 63 showed homeopathic treatments were effective. No voice was given to all the many patients of homeopathy and successfully cured cases. However given all this homeopathy made an incredible stand for itself, you can view all ‘for’ and ‘against’ evidence on the House of Commons website at: www.publications.parliament.uk/pa/cm200910/cmselect/cmsctech/memo/homeopathy/contents.htm

Many also discussed the negative coverage that homeopathy receives from the press with the same age-old arguments against homeopathy being rolled out. For example: there is no scientific evidence it works – not true; it is only a placebo – not true; it can not work because the remedies are so diluted – not true. All these and other allegations can be answered with simple, logical and well-evidenced answers but a lack of will and professional investigative journalism seems to be missing from the press. Perhaps this could be our next focus.

Many ideas were shared and the whole event had a really positive mood! Homeopaths were united, upbeat and speaking out. Action for homeopathy was taking place right at the heart of Parliament and there was a real feeling we were being listened to and taken seriously. At 3.45pm the 28,000+ signatures were handed over to number 10 and the lobbies mission was complete!

It felt like a fantastic day for homeopathy, and I was very pleased to have been part of it.

With warm wishes to you all!