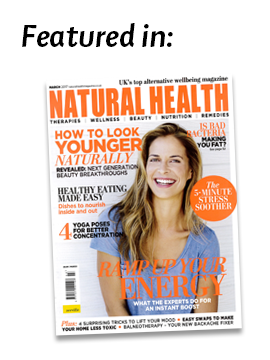 A is for Arnica

#1 Homeopathic remedy for accidents & shock
Arnica is employed for bruising and swelling after accidents and also after shock (including bad news). It can be used to relieve pain caused by operations and sport injuries. Arnica is especially effective in treating patients who bruise easily, even from the slightest shock. 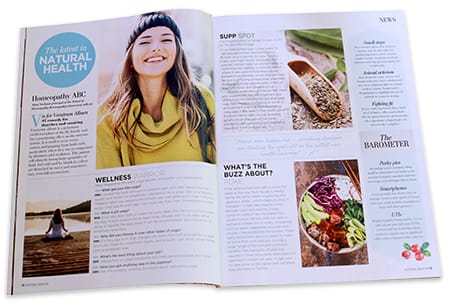 B is for Bellis Perennis

#1 Homeopathic remedy for stains and sprains
Bellis may be useful in sprains, caused by a heavy impact, which bruise both the soft and ligamentous tissues or when the body has been overworked and stretched beyond its capacity. For example strained muscles or tendons from weight lifting, athletics or the stiff and sore bodies of gardeners.

C is for Calendula

#1 Homeopathic remedy for healing wounds
A remarkable healing agent for open wounds, grazes and parts that will not heal; for ulcers, superficial burns, after tooth extraction or childbirth etc. Promotes rapid healing, stimulates the formation of healthy scar tissue and prevents suppuration. The pain may be violent and out of all proportion to the extent of the injury.

D is for Drosera

#1 Homeopathic remedy for croup
Drosera is indicated for croup, whooping cough and other lung disorders that produce these symptoms: a maddening tickling in the throat with spasmodic coughing that can lead to vomiting, the person struggles to breathe and has cold sweats. Always seek professional advise with croup. 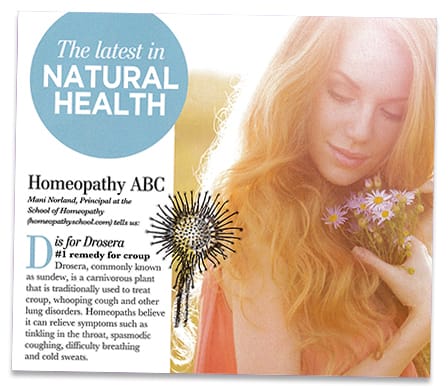 E is for Eupatorium

#1 Homeopathic remedy for aches
This person will complain of aching all over, and may feel as if their bones are broken, particularly in their neck, back and legs. The ache extends even to their eyeballs. They have shaking chills but desire cold things like ice cream; beware of cold water though - it can make them vomit!

F is for Ferrum Phos

Constitutional homeopathic remedy
An important remedy for anaemia, haemorrhaging, physical weakness, neuralgia, Raynaud's disease and other circulatory disorders. Affinity with chest symptoms such as bronchitis, pneumonia, pleurisy, croup, whooping cough and chronic coughs. Symptoms are worse at night, and with motion and noise, and better for lying down. 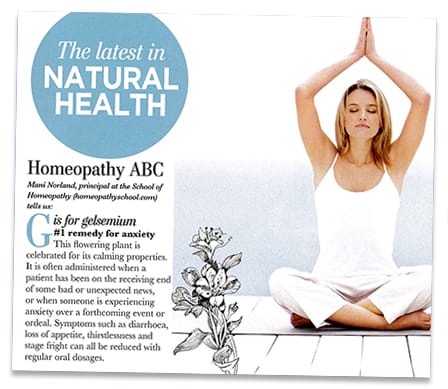 G is for Gelsemium

#1 Homeopathic remedy for anxiety
May be indicated when the patient has been on the receiving end of some bad or unexpected news, or has anxiety over a forthcoming event or ordeal, such as an exam or court appearance. They feel they may not be able to cope. Their symptoms can be diarrhoea, loss of appetite, thirstlessness and they do not want to move or talk.

H is for Hypericum

#1 Homeopathic remedy for injuries
One of the main remedies for injuries to nerves, especially of fingers, toes, coccyx and nail beds. Crushed fingers, especially tips. Excessive painfulness is a guiding symptom. Punctured and lacerated wounds. Relieves pain after operations, spasms after every injury, injured nerves from animal bites neuritis, tingling, burning and numbness.

I is for Ipecacuanha

#1 Homeopathic remedy for vomiting
A great remedy for vomiting and persistent nausea, especially when the patient has been sick but still feels no relief. Ipecac can help if this person has overeaten rich foods, with a bloated feeling in the abdomen as well excessive belching and gas. Perhaps they have been in the sun, or been made angry or indignant over a situation (that makes them feel like vomiting).

J is for Jalapa

Constitutional homeopathic remedy
Jalapa is an important remedy for infant colic and watery diarrhoea, in situations where the child is calm during the day but restless and difficult to console at night. The stomach is distended and the soles of the feet feel very hot. Also to be considered for adults with chronic stomach or intestinal complaints, including sour or bloody stools and painful eructations; all symptoms are worse at night.

K is for Kali Bich

#1 Homeopathic remedy for painful sinuses
Kali bich is an excellent choice for catarrhal symptoms, colds and sinusitis, particularly if there is lots of thick or stringy yellow/ green discharge. It may also help with headaches or migraines that are accompanied by nausea, vomiting and/or severe sinus pain. Kali bich can be effective in people who suffer with recurrent sinusitis and nasal congestion, accompanied by burning pain.

L is for Ledum

#1 Homeopathic remedy for puncture wounds
Ledum reputedly has anti-tetanus properties; it is used to treat deep wounds such as those caused by nails or other sharp pointed instruments, as well as animal or insect bites. The wound throbs painfully and the skin around it is swollen, tender, blue and cold; the person is very sensitive to touch and feels better for cold applications.

M is for Mercurius

#1 Homeopathic remedy for mouth ulcers
Mercurius is a good choice for people who are human thermometers, in other words they are extremely sensitive to both heat and cold and feel better in moderate temperatures. These people are easily exhausted and may be prone to colds or swollen glands; there is profuse (often offensive-smelling) perspiration and extreme thirst. The mouth ulcers are yellowish in appearance and often have a foul-smelling discharge. Night time is when their symptoms are at their worst.

N is for Nux Vomica

#1 Homeopathic remedy for hang-overs
Nux is a good choice for over-indulgence in rich food. People who need this remedy tend to be chilly; emotionally they may be irritable, tense and/or over-sensitive. They are likely to suffer from digestive complaints and feel better after vomiting (although often cannot vomit easily). They work hard and play hard, subsisting on excessive quantities of coffee, alcohol and tobacco. They feel better for rest, warmth and hot drinks and are worse in the morning.

O is for Opium

#1 Homeopathic remedy for feeling ‘numbed out’
Opium is worth considering after a severe trauma or an operation, if the person seems to have blanked out what has happened and/or is not in pain (when pain is expected, such as with a peptic ulcer). There is a state of shock, accompanied by ashy skin, shallow pulse, cold sweat and extreme drowsiness. The sensation of fear may persist for a long time after a severe shock or fright; alternatively the symptoms following the original shock persist for a very long time afterwards.

P is for Pulsatilla

#1 Homeopathic remedy for childhood ear infections
This remedy is a very good choice for ear infections; it would be particularly worth considering if both the symptoms and the patients themselves are very changeable. Emotionally they may be moody, tearful and wanting company. Children may be clingy and whining. There may be an absence of thirst; symptoms are worse in a stuffy room, and better for fresh air. Discharges (from the ears, nose or eyes) are thick, bland and yellow/green. The onset of symptoms often begins after getting wet and/or cold feet.

Q is for Quercus

Constitutional homeopathic remedy
Quercus can help alleviate the effects of alcohol, taking away cravings and helping with a liquor habit or an alcoholic state. The patient may suffer from vertigo, deafness and noises in the head. They can have giddiness and feel the need for support, or may not wish to move. They can be glum, depressed and nervous. It is also known for spleen infections, helping with the enlargement of the spleen or liver.

R is for Ruta

#1 Homeopathic remedy for injuries to tendons & bones
The bones feel damaged; periosteum injuries can be particularly helped with Ruta. Injuries may be the result of repeated postural or occupational stress and the area is often inflamed. Pain feels bruised or beaten-up and is worse if the patient lies on the affected part. Emotionally the patient may feel anxious or troubled and despondent around dusk. He is likely to feel chilly, especially in the extremities; warmth improves his symptoms. There may be mental exhaustion rather than weakness. 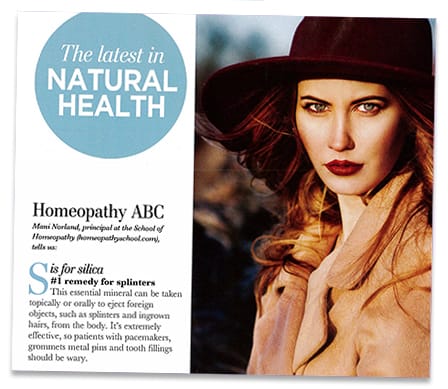 S is for Silica

#1 Homeopathic remedy for splinters
An excellent first aid treatment for forcing out splinters and other foreign bodies; beware, though, if you have a pace-maker, grommets, metal pins and so on. The patient may be chilly and suffer with recurring infections that take a long time to heal. Symptoms are better for heat and worse for cold, damp or wet weather.

#1 Homeopathic remedy for restlessness
This remedy is a great choice for excessive sensitivity and excitability of all the perceptive senses; the patient is irritated by light and glaring colours. Tarentula has an affinity with the motor and sensory functions of the nervous system; the patient is extremely restless on a physical level and there may be uncontrolled agitation, possibly with twitching, jerking, running and dancing. The hands and fingers are never still. Moods change quickly; the patient may be hysterical or in a similar state of heightened emotions and there may be sudden acts of violence or furtive destructiveness, as well as outbursts of rage at the least contradiction. 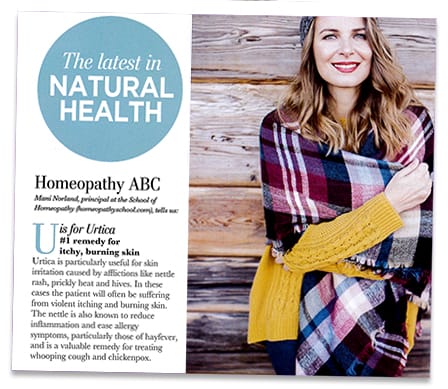 U is for Urtica

#1 Homeopathic remedy for itchy, burning skin
An excellent choice for nettle rash, prickly heat or hives. There is violent itchiness accompanied by burning heat. Possible causes of hives that require Urtica include bee stings, shellfish and pinworms. It is also a valuable remedy in the treatment of whooping cough and chickenpox.

V is for Veratrum Album

#1 Homeopathic remedy for collapse with coldness & vomiting
As well as the above symptoms, the person's facial muscles may be twitching or jerking. The entire surface of the body is very cold and there may be beads of cold perspiration on the forehead, or copious perspiration all over the body, with shivering. They crave cold food, ice or ice cold drinks. The skin, hands and/or nails may also be blue. The person may be semi-conscious, hallucinating, frantic or maniacal.

W is for Wyethia Helenoides

Constitutional homeopathic remedy
A good remedy for pharyngitis, particularly if the throat feels very irritated or dry and needs constant clearing, which brings no relief. Swallowing is difficult. Also worth considering for autumnal hayfever and allergic rhinitis where the nose is very itchy and dry and feels obstructed.

Constitutional homeopathic remedy
The specific action of this remedy is on the nervous system and mucous membranes. An excellent remedy for neuralgia and paralysis, especially hemiplegia. Patients may also suffer with poor assimilation, sluggish circulation, insomnia, occipital headaches and menstrual problems. 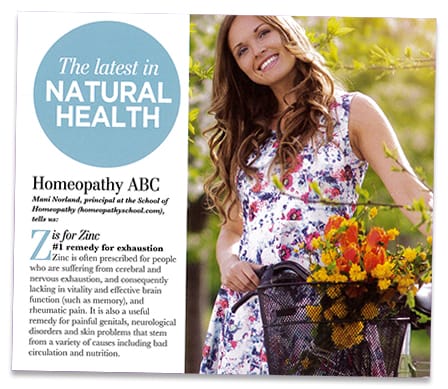 Z is for Zinc

#1 Homeopathic remedy for tiredness and exhaustion
The patient is suffering from nervous exhaustion and is physically depleted. He is extremely weak, although he has a violently fidgety or restless feeling in his lower limbs. There may be tremors, jerkings and twitchings or other neurological symptoms. The person is pale, cold, expressionless and ravenously hungry. Movement improves all symptoms; touch worsens.

The A-Z of Homeopathy featured in Natural Health Magazine, one a month for 26 months.