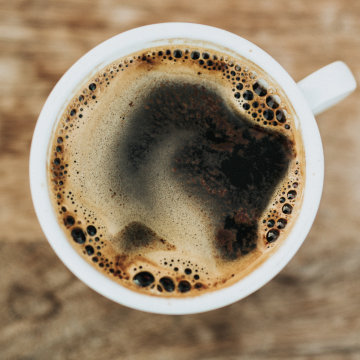 We have all heard that we shouldn’t drink too much coffee – the main reason being the negative effects of the caffeine content. Caffeine not only keeps us awake at night but it is also linked to acid reflux, headaches, nausea and anxiety. Caffeine is a well-known diuretic and can also impact the body’s hormones causing blood sugar imbalance – and its addictive nature keeps us coming back for more.

But coffee also has a number of health benefits… Could coffee minus caffeine be the ultimate health drink?

What is decaffeinated coffee?

Decaffeinated coffee comes from exactly the same plant as regular coffee, but it has had the caffeine removed safely using either water, organic solvents, carbon dioxide, or charcoal filters. It is not entirely caffeine free – but to be classed as “decaf” at least 97% of the caffeine is removed. The average cup of decaf contains between 2-5mg caffeine compared to regular coffee with around 100mg or more per cup. Decaf coffee is also significantly lower in caffeine than tea, which averages 30-50mg per cup.

Removing the caffeine has little effect on the overall nutritional content of coffee, although the taste may be slightly milder. It’s worth noting that any type coffee beans can be decaffeinated – meaning a wide variation in flavour of different products. Incidentally, what we think of as the ‘strength’ of coffee is not related to the caffeine content, so it is still possible to find a strong, rich tasting decaf.

Antioxidants: Coffee beans provide a great concentrated source of antioxidants, such as polyphenols. It’s these antioxidants that give it most of its health benefits. And the good news is that decaf coffee retains around 85% of the antioxidant content of regular coffee.

Nutrients: A cup of decaf can contain up to 5% of the daily recommended intake of potassium, and 3% of the daily amount of magnesium. There is also a small amount of vitamin B3 – making a useful contribution if several cups are drunk per day.

What you won’t get from decaf is the temporary increase in mood, energy, concentration and stamina that we associate with caffeine – however a number of studies have found that the placebo effect plays a strong part in these apparent benefits. This means that drinking a cup of decaf but believing that it contains caffeine can give these same positive effects.

Caffeine is an addictive drug so it’s not a good idea to give it up too quickly as you may experience withdrawal effects like headaches and mood swings. But if your caffeine habit is getting out of hand try switching slowly across to decaf. You could also start by mixing your coffee half and half to gradually wean yourself off.

You will be rewarded for your efforts with less heartburn, reduced anxiety, improved energy and better quality sleep.

Photo by Nathan Dumlao on Unsplash