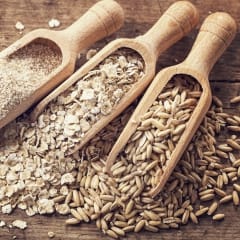 The whole grain of truth?

The world of nutrition is full of controversies and conflicting information – the latest is that whole grains may actually be causing as many health problems than they solve. Let’s take a look at a couple of reasons behind this.

Eating the whole grain as opposed to refined grains has been the longstanding recommendation of health and nutritional professionals. The bran and germ is rich in beneficial minerals and fibre, and eating fibre helps not only to combat constipation, but also stabilises blood sugar, reduces cholesterol and is protective against certain cancers.

None of this has changed - which makes eating whole grains sound very sensible in comparison to their highly processed, nutrient deficient, refined counterparts.

But there are two potential problems with whole grains which deserve some consideration: agricultural residues and natural lectins

Agricultural residues
Glyphosate is the world’s most widely-used weedkiller, and although The World Health Organisation have stated it is a “probable human carcinogen” it’s still legal to spray on non-organic crops in many countries across the world. It’s usage in the UK has increased by 400% in the last couple of decades and it has regularly been found during routine testing of wholemeal bread.  As well as the carcinogenic effects, glyphosate upsets the balance of the microbiome giving rise to similar symptoms as gluten intolerance. This may make people believe they need to avoid gluten, when in fact it is the chemical residues that are causing the problem.

So how does this link to whole grain? Well, looking at an analysis of residues revealed that glyphosate concentrations in refined wheat flour are extremely low compared with wheat bran. So is it a coincidence that our relatively recent obsession with eating wholegrains correlates to a dramatic rise in the number of people reporting symptoms of gluten intolerance? At this stage it’s only a theory, but if you suspect gluten may be causing a problem it would be worth switching to organic or glyphosate-free flour for a few weeks to see if symptoms improve. It is also worth noting that a number of countries have placed restrictions and limits on the use of glyphosate over the past few years, so if you are abroad you may find that that local bread causes no reaction.

Plant lectins
The second issue with wholegrains is the presence of substances called lectins.  Lectins are proteins manufactured by plants and used as a natural defence against insects. They work by binding to molecules and interrupting nerve transmission, effectively disabling the insect so it can cause no harm. However, lectins also have consequences in humans since they mimic body proteins and confuse the immune system, leading to auto-immune diseases where the body mistakenly attacks its own cells. Over the last 40 years or so wheat germ has been hailed as being good for health, but we now know that agglutinin (the protein found in wheat germ) is a lectin which causes heart disease in animals, and human ingestion has also been linked to neuropathy and ‘brain fog’.

Lectins act as powerful catalysts to auto-immune diseases, so there is a good argument for removing lectins during dietary treatment of conditions such as rheumatoid arthritis, vitiligo and MS.  Note that lectins are found in a number of other whole foods, including certain fruits, vegetables and legumes, so a diet tailored by a Nutritional Therapist with specialist knowledge in the area would be required to guard against nutritional deficiencies during treatment.

Final thought
While refined foods are basically ‘empty calories’ stripped of their nutritional value, switching to wholegrains without considering the whole truth has not necessarily improved the nation’s health. This is yet another example of the complexity of health and nutrition, and a great example of why it is so important to understand the bigger picture before making dietary changes.