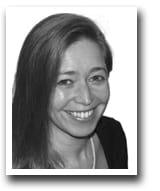 Sarah was born in Worcestershire in 1967. As a teenager Sarah began to study yogic philosophy and, following grammar school, Sarah went on to study Anthropology at university, exploring the varied and sometimes contradictory beliefs of many societies. Upon leaving university Sarah traveled widely, spending long periods in India, much of it in different Ashrams. Sarah mainly studied within the Sivananda tradition before eventually, returning to the United Kingdom where she continued to study and practice Yoga, though now in the Desikachar tradition. This is a very different type of yoga than the Sivananda tradition and it enabled her to broaden her experience. Several years later Sarah’s yoga teacher suggested that she train to become a yoga teacher herself and she went on to become a qualified teacher with the British Wheel of Yoga, the governing body for yoga in the U.K. At this time, as suggested by her tutor, Sarah also began to work with Iyengar yoga, yet another, very different, type of yoga. Thus she continued to broaden her understanding.

For a number of years Sarah continued to study and practice yoga at the same time as teaching classes to different groups on a weekly basis. Unlike most yoga teachers, who must apply, Sarah was invited by the British Wheel of Yoga to become a Teacher Trainer herself and she spent two years training as a Diploma Course Tutor. She has now run three, three-year diploma courses and is currently running a fourth. Though Sarah continues to teach regular classes to the public, she finds teaching diploma courses a particular pleasure. Sarah also runs workshops, open both to advanced students and yoga teachers alike, and has for many years tutored at National Teachers' Training Weeks for The British Wheel of Yoga.

Sarah’s other passion is Ayurveda, the traditional medical tradition of India, where yoga is used as a therapeutic tool. She has been training for over seven years, having been fortunate enough to receive training from two of the world’s most revered authorities on Ayurveda, Dr David Frawley and Vaidya Atreya Smith. More recently Sarah undertook an Ayurvedic internship at a clinic in Pune, India.

Sarah has a practice in the U.K. where she works as an Ayurveda Educator. She says she thanks Ayurveda and her teachers for helping her to gain a much deeper understanding of subtle energies and the therapeutic application of yoga. She is currently studying for a Master of Arts in The Body: Eastern & Western Perspectives.

Sarah takes great pleasure in being able to present this course through the medium of The School of Health.