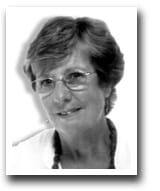 Diane sadly passed away in 2011, but her work lives on in the Anatomy & Physiology Course that she helped to write. Diane was a chartered biologist, graduating at honours level in zoology in 1966 and obtaining a first class teaching diploma in 1967, both at the University College of Wales, Bangor. Diane's teaching career had been mainly in tertiary colleges where she managed life science departments and delivered A level and G.C.S.E. programmes and Access to Nursing.

Diane had been involved with The School of Health for about 20 years, mainly as a distance-learning tutor but also as an editor of the Anatomy and Physiology Course. About ten years ago, the course needed a major re-write because when it was originally devised some of the most difficult topics were in the first unit and one of the textbooks was rather too scientific. Diane helped with this major modification, ensuring its place as a popular course.

Diane enjoyed her work with The School of Health and, although she never trained as an alternative practitioner, she was a firm believer in alternative therapies and the holistic approach to healing. It never ceased to amaze her how intricate and beautiful our bodies are at all levels of function and it was one of her greatest joys to share this with students on the A&P Course.