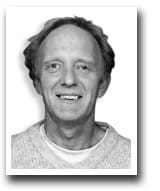 Sadly Bill passed away in March 2018. However his teachings live on through his wonderful contribution to this course. Bill became a Dietary Therapist in 1989 after training with the College of Dietary Therapy in Devon. Bill's interest in nutrition began some years before, when he left London after 15 years of city life to spend a year on a smallholding in North Devon which was teaching a form of self-sufficiency. At the end of this year he spent six months working on an organic market garden in Somerset.

After qualifying as a Dietary Therapist, Bill worked in a Natural Health Centre in Devon for some years, comparing notes with Homeopaths, Osteopaths, Massage and Aromatherapists, and gaining a well-rounded insight into what might be described as a philosophy of natural health. Nutrition is a fascinating subject because it has its roots quite literally in the very ground we inhabit, and yet it is capable of giving rise to the most ungrounded aspirations.

Bill was for some thirty years a student of meditation, one of the most basic tenets of which is mindfulness. "The most basic question to ask anyone worried about their own nutrition is "do you enjoy eating?" This question needs some mindfulness in order to answer it truthfully, because we all tend to eat with our attention elsewhere and we need the strong sensations of sweet, sour, hot and cold to remind us that we're eating at all."

"Our bodies are actually equipped with much subtler sensors which can tell us whether the food is doing us any good. If we are able to "listen" to the sensors then we can truly learn to enjoy our food." It is this cultivation of enjoyment of food that lies at the heart of his philosophy of nutrition.