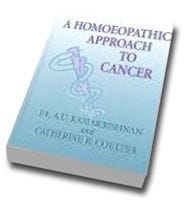 This book, written by two experienced homeopaths, is based on Ramakrishnan's clinical work in India stretching from 1974 to 2000 in which time he treated more than 5,000 patients suffering with cancer. In some cases Ramakrishnan's approach has resulted in the disappearance of malignant tumours on cat scans and MRIs.

"What led me to focus on cancer was a series of failures in cancer cases in earlier days, particularly the loss of my sister in 1974 and my elder brother in 1984, both of whom were homoeopathic doctors. From that time on I have been trying out different combinations, potencies, and dosages of remedies in the treatment of this disease."
Dr. A.U. Ramakrishnan.

About the authors:
A. U. Ramakrishnan (Born 1942)
Dr. Ramakrishnan was born November 2, 1942, in Thirupathi, India. Some areas of his expertise are cardiac disease, cancer, multiple sclerosis, epilepsy, arthritis and diabetes. He is the homeopathic physician to the president of India and he has been presenting papers at the International Congresses since 1981.

Over his career Dr. Ramakrishnan has treated thousands of cases of cancer and consequently he has amassed an extraordinary amount of information. Working with Dr. Ramakrishnan the role of Catherine Coulter here has been to assemble and interpret these records and put them into an intelligible and working proposal.

Catherine Coulter (born 1934)
Catherine Coulter was born in London, England, and now lives in the United States. She has been a full time practicing classical homeopath since 1974. It was a year after this that she took up teaching. She has become internationally well known for her characteristic and vivid portraits of many of the classic homeopathic remedies.