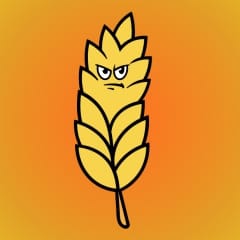 The rise of gluten intolerance

The problem with modern wheat...

Gluten-free diets were rare in the 80s and 90s but nowadays most of us know at least one person who avoids wheat or gluten.  But humans have been consuming wheat for thousands of years, so what has changed? Why are we more sensitive now?

One theory is that more pollutants in the environment and chemical additives in our food are taking their toll – with a gradual build-up weakening the immune system and triggering reactions.  There are also differences in the type of wheat grown today compared to that used 100 years ago, and dramatic changes to processing methods over the last 60 years have not only increased the amount of gluten that reaches the gut but also changed the structure of the molecules. All of this adds up to a greater potential for adverse reactions.

What is gluten intolerance?

Gluten can cause inflammation and damage to the delicate lining of the gut which affects nutrient absorption and increases the permeability of the intestine wall. This increased permeability is known as a ‘leaky gut’ and allows particles of undigested food, waste material and bacteria - which would normally pass through the gut and out of the body – to cross the intestine wall and enter the blood stream. Once in the blood the foreign particles cause a myriad of problems, with symptoms ranging from full-blown allergic reactions to bloating, pain and diarrhoea to headaches, skin rashes, fatigue and depression.

Coeliac disease is a severe form of gluten intolerance which is recognised by conventional medicine. It is an autoimmune condition where the body’s system inappropriately attacks its own cells in the presence of gluten.  But a growing number of non-coeliacs are also becoming sensitive to gluten and other proteins in grains, and suffer similar symptoms. It is estimated that a massive 10% of the population experience now some kind of sensitivity to gluten and other wheat proteins.

So what has changed?

Crop manipulation
Wheat has been heavily manipulated over the years to maximise yields. A major change occurred in the mid-20th century when farmers realised the value of growing dwarf varieties of wheat. The shorter stems coupled with the use of new pesticides and fertilisers gave a much higher yield, but with it came the introduction of chemical residues and a decline in micronutrient levels - with zinc, iron and magnesium being significantly lower than in the early 20th century.

More gluten
Gluten is a family of proteins found in grains such as wheat, rye and barley and is what gives dough its elastic texture. It helps bread to rise, and more gluten makes for a lighter loaf. Modern ‘hard’ wheat varieties can contain more than twice the gluten of traditional softer varieties.  While this makes them popular with commercial bread manufacturers it also means we are consuming far more gluten, and the more gluten that reaches the gut, the greater the chance of a reaction.

Changes to processing
New processing techniques were introduced in the 1960s using high speed mixers, high pressure and chemical oxidants. These methods made it possible to refine large amounts of wheat more quickly and at a lower price, but also affected the structure of the starch and gluten molecules in the finished product. Grains no longer needed to be soaked, sprouting and fermented for hours; however, those traditional processes are necessary to deactivate certain anti-nutrients in the grain - such as phytic acid, enzyme inhibitors and lectins. This new method of processing changed the way the finished product acts inside the body.

To get an idea of the scale and speed of change - just over 100 years ago around 70% of our bread was baked in the home, but within 20 years this figure had more than halved and by the 21st century very few loaves were homemade.

What are the alternatives?

If you suspect a mild to moderate intolerance, there are several ways to minimise the chance of triggering symptoms:

Sourdough is a method of baking bread using beneficial bacteria to ferment the flour, which improves the digestibility of the finished product. The method is more time consuming that fast-acting yeast, but the process also results in a loaf with a lower Glycaemic Index (GI).

Spelt contains gluten so is not suitable for coeliacs, but the gluten in spelt has a different molecular structure to wheat which makes it easier to digest.

Rye flour doesn't have enough gluten to react with yeast, so is another grain that is often well tolerated by those who react to wheat.  Rye bread can be made using the sourdough technique.

Ancient varieties of wheat like Einkorn and Kamut are also available for baking. There is a good body of anecdotal evidence suggesting that Einkorn is much better tolerated than modern wheat, while Kamut has been shown to have anti-inflammatory properties and is less likely to trigger sensitivities. Einkorn has even had good results in studies on coeliac patients, although sufferers of coeliac disease should always proceed with caution.

While it is hard to find any health benefits of gluten as such, there are benefits of eating gluten-containing foods like wholegrains. These have been shown to reduce risk of heart disease, diabetes and certain cancers.  People who put themselves on gluten free diets unnecessarily may be inadvertently doing more harm than good - by cutting out beneficial grains and replacing them with highly processed (and cleverly marketed) gluten free ‘alternatives’.

If you have a severe sensitivity you will probably be advised to avoid gluten altogether. This seems fairly easy these days with many alternatives available, but be aware that some of these products are heavily processed and refined – just because they are labelled gluten free does not make them healthy choices! Use common sense and judgement when choosing new foods, or ask a Nutritional Therapist for advice.

Gluten free pasta, made from corn, lentils or peas is widely available

Gluten free flours including Sorghum, Almond and Gram flour can be used in various ways. They can be combined with lighter flours (like rice flour) for baking; used to make unleavened products like naan bread; or used in batters and pancakes.

If you suspect that gluten is causing you a problem, a discussion with a Nutritional Therapist will help you modify your diet appropriately so you don’t miss out on any key nutrients. You will soon feel the benefits for yourself and you might even be surprised at how easy it is!