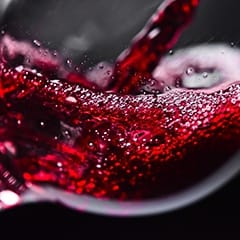 Moderate amounts of red wine have long been thought to be beneficial to health, due to the antioxidant properties plus the ability to relax the blood vessels and reduce blood pressure. But some people get a reaction from drinking even small amounts, and not being able to join in with a toast to the happy couple can be very frustrating when symptoms appear within 15 minutes of the first mouthful.

Understanding the cause is the first step towards finding a solution – we look at the main possibilities below:

A person can be allergic to anything, but true alcohol allergy is rare. Some people who react to alcoholic beverages may in fact be reacting to another component - such as wheat, barley, yeast, hops or grapes. A true allergy will cause severe symptoms like itching, hives, eczema, difficulty breathing, dizziness and nausea. Extreme cases may cause diarrhoea, vomiting or anaphylaxis, and require immediate medical attention.

The majority of people are not allergic to alcohol, but they may have an intolerance to it that gives rise to similar symptoms.

An alcohol allergy is where the immune system over-reacts to alcohol, while an intolerance is when the digestive system doesn’t process alcohol properly. An enzyme called Aldehyde dehydrogenase (ALDH2) breaks down alcohol in the liver, and those with low levels of this enzyme may experience symptoms of alcohol intolerance. These include feeling hot and red in the face, headaches, nausea and increased heartbeat.

A more common cause of reactions to wine is histamine or sulphite intolerance, rather than intolerance to alcohol itself.

Histamine is a chemical which is found naturally in the body as well as in foods and drinks such as smoked meats, fermented vegetables, mature cheeses, wine and beer. Histamine is broken down by the enzyme diamine oxidase (DAO). A lack of this enzyme can cause allergy-like symptoms such as itchy skin, sneezing, a runny nose and sometimes stomach cramps and diarrhoea.

Since histamine is found in the skins of grapes, red wine usually contains much higher levels than white. Rose and sparkling wines like Cava or Prosecco, are generally low in histamines.
A study of individuals suffering wine intolerance found plasma histamine levels rose significantly within 30 minutes of drinking 125ml red wine, with an accompanying increase in adverse reactions. Another study looked at histamine levels in red wine, and found that the year of wine production could have a significant effect on histamine levels regardless of the type of grape used. This makes it difficult to advise on low histamine reds. Hope is on the horizon though, as recent research into the fermentation process has found a strain of lactic acid bacteria which could reduce the histamine content of wine by as much as 80%.

Sulphites are added to wine to act as preservatives, and can trigger allergic-type reactions including hives and asthmatic symptoms in sensitive individuals. Sulphites also appear in high levels in many foods such as dried fruits, frozen seafood, pickled foods, and canned or other heavily processed foods.

Sulphite sensitivity is thought to be relatively rare, affecting only around 1% of the population; however this rises to 10% amongst asthma sufferers, making them a high-risk group.
All wine contains sulphites naturally, so ‘sulphate-free’ wine is technically impossible, although wines with no added sulphites may be labelled as such. If you are highly sensitive you many need to avoid wine altogether but if your reaction is less severe you may be able to tolerate organic wines with no added sulphates. White wine tends to contain higher levels of sulphites than red, with sweet whites being the worst. A good low-sulphate wine could contain about 35ppm at the bottling stage, which reduces to around 10ppm within a few weeks – a level that many people will be able to tolerate.

Migraine sufferers might be sensitive to tannins found in skins of grapes, but could opt for low tannin varieties such as Pinot Noir, Rioja, Beaujolais and Tempranillo while avoiding high tannin grapes like Cabernet and Bordeaux.

Tyramines are another common migraine trigger. These are amino acids found in red wine and a range of foods including mature cheese, chocolate and olives. Tyramines constrict blood vessels and are a key trigger for headaches in sensitive individuals.

Although drinking more than one glass is not generally recommended, there is hope for those who want to be able to enjoy a small amount of wine on a special occasion. If you react badly to wine, then start by identifying any foods which cause similar symptoms - a nutritional therapist can help you with this. Once you know what’s responsible for your symptoms, you’ll be in a better position to select wines that are less likely to cause a reaction. For those with severe sensitivity or allergy the only option may be to avoid wine altogether, and join in the celebrations with a lime and soda instead!

To learn more about the components of your food and drink, why not consider a course in diet or nutrition?