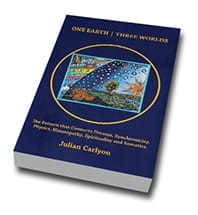 Printed in the UK, paperback, 137 pages

Mystics of all traditions speak of the unity that lies behind all things.

Scientists seek to define the laws that govern matter and energy.

But neither approach accounts satisfactorily for the world of imagination, ritual, and creativity, for the inexplicable connections found in precognition, for the uncanny accuracy of oracles like the I Ching, or for the effectiveness of healing modalities like homeopathy.

In One Earth | Three Worlds, Julian Carlyon draws on quantum theory, Carl Jung’s theory of synchronicity, the work of scientists Rupert Sheldrake and David Bohm, and ancient Chinese wisdom, to better understand how the unity lying behind all life might manifest itself in the daily-life world of our experience.

Through his schema of ‘oneness world,’ ‘twoness world,’ and ‘intermediary world,’ the author draws together such diverse threads as quantum entanglement, synchronicity, similarity and analogy, homeopathy, healing, dreams, creativity, free choice and destiny, spiritual unity, movement practice and the body.

In doing so, he offers a way to appreciate how spiritual and scientific perspectives can exist alongside one another—a way to see how the unity behind everything can show up and work its magic in the physical reality of our lives.

This is a book for anyone – scientist, therapist, creative artist, healer, eco-activist or enquirer – curious about how our world works and how to reconcile our apparently conflicting approaches to reality. 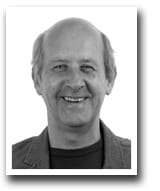 About the Author
Julian has been a searcher on the path for nearly forty years and over those years he has met many guides and mentors. After an early interest in Chinese philosophy, Jungian psychology and astrology Julian was introduced to homeopathy in the early seventies by his friend and mentor Misha Norland. At the time he was in Wales, living with others and taking the first steps in the journey of self-exploration. Julian had never heard of homeopathy, but it seemed to him to offer the combination of profound philosophy and understanding of the human condition, along with the practical means for helping people to find physical and psychological wellbeing. It was obvious to him that it was a profound system and a powerful tool.

Julian returned to London to start a family and become a student of his first homeopathic teacher, John Damonte. This teaching, as well as later teaching from George Vithoulkas, gave him a grounding in the practice of classical homeopathy. John introduced Julian to a homeopathic approach which included an understanding of Jungian psychology, of the four elements of antiquity (earth, air, fire and water), as well as the periodic table of the elements. These seeds of understanding were to take deep roots over the coming years.

Julian’s next mentors were Ian Gordon-Brown and Barbara Somers who directed the Centre for Transpersonal Psychology in London. This approach, drawing on the work of Jung, Assagioli and many others, made perfect sense to him as it recognised the fundamental importance of wholeness. It also recognised that the journey down, into darkness, into the underworld, into the unconscious, was every bit as important as the spiritual journey up, to the light, to the mountain top. Julian had found a teaching that said you couldn’t do one without the other if you wanted to come to your truth. You needed light and dark, male and female, spirit and soul.

Barbara was also a teacher of dreams, Zen and alchemy and all these became important to Julian in his understanding and in his efforts to help people to be well and free.

By the 1990’s homeopathy itself was going through some major changes. Many new remedies were being proved. New understandings of the periodic table of the elements as well as plant and animal natural families were being unfolded by Jan Scholten, Rajan Sankaran and others. A deeper understanding of the human being and our relationship to these kingdoms was emerging and Julian became a keen student of all of this.

In 2009 he came to the movement work of Sandra Reeve and Suprapto Suryodarmo. This was a natural progression for him – to work with energy, gesture and the unity of movement. He became Sandra’s student and completed her Move Into Life movement training. This approach later become part of his work with groups and individuals.

Over the years Julian has faced many difficulties which have challenged him to dig deeper to find a reliable truth and to open his heart – bringing him to the ultimate truth of non-duality. There is only One. The great modern teachers of advaita (non-duality) say there is no separate self, no doer. Many teachers are now coming forward to remind us that we are already one and whole. All that is required is that we open ourselves to all that we are.